Knowing music theory means nothing unless you can make some music from it. It doesn't matter if you're just jamming, playing a solo bass gig, composing or playing in a band; you want to be able to make music from the ideas you learn, right? Learning how to form chord voicings will give you a powerful tool to start making the kind of music you want.

What Is A Chord?

A chord is simply a collection of three or more notes played together at the same time. The notes within a chord are called the voices and there are many chord voicings. The notes from chords come from scales and the video lesson (and this post) uses C major as an example. The principle applies to any chord quality though, not just major. 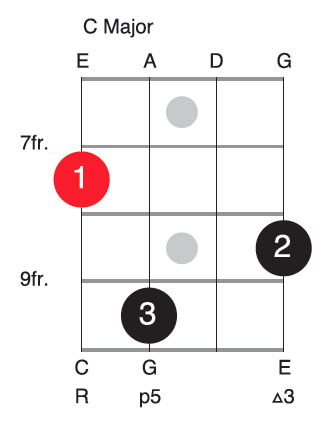 The notes are spaced apart to avoid a muddy sound - something that a bass guitar is prone to with its low frequencies. The chords of Blackbird by The Beatles are voiced in this way.

Let's now explore what happens when we use the other notes from C major that, so far, we haven't touched.

In C major, the second note is D. We get two lovely voicings using this note: C sus2 and C add9. 'Sus' stands for 'suspended' and it means the chord contains no major third. Compare the sus2 chord to the add9 and you'll see the add9 chord does contain the major third (E). That's the only difference and it's subtle. 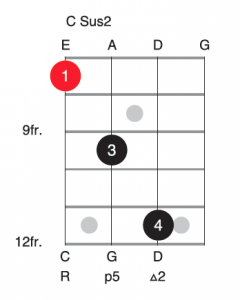 Every Breath You Take by The Police contains add9 voicings.

Yes, I know these are chords played on electric guitars but that's obviously what you'll hear far more often in recorded music. You will start to recognise these voicings when you listen to songs that contain them and you can then use those ideas as a springboard for your own.

This is technically not a chord as it only contains two notes (it's a double stop or diad) but it's so common and useful I have to mention it. Just playing a root and a tenth gives you a very cool sound; most famously heard on Herbie Flowers' iconic bassline on Walk On The Wild Side By Lou Rawls.

Now check out the amazing story behind the session...

Adding the fourth note into a chord gives us a sus4 chord. This chord tends to have an unresolved quality which is why the fourth is often followed by the major third. This resolves the tension of the fourth. Tension and release feature a lot in all styles of music. Pinball Wizard by The Who is a great example of the way sus4 chords are often used. 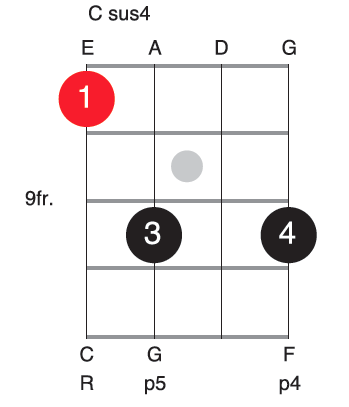 These monsters are the lifeblood of rock music. Jaco also used them quite a lot though too (example at 4:04 in the video below):

This is the one chord voicing that you can use to write tunes really quickly. 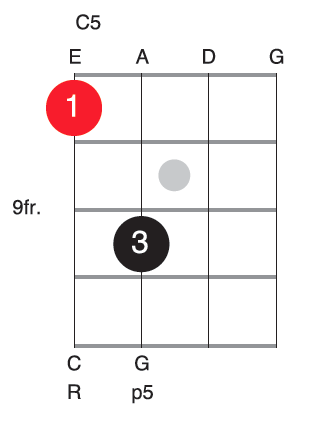 Try taking the above shape and moving it onto any note of the C major scale (apart from the 7th note - B. That note has a b5 interval so it won't sound quite right there).

Adding the sixth note of the scale give you a hip sounding 6th chord. 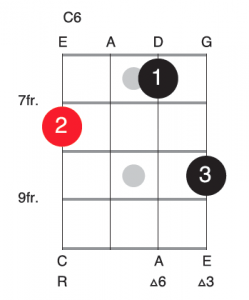 That chord will work on the C and on the G so try moving this shape to those notes (3rd, 8th and 15th frets of the E string).

Now, these babies really can be used a lot in many situations. They sound jazzy but can be used in many different styles. There's one really useful voicing on the E string and on the A string. 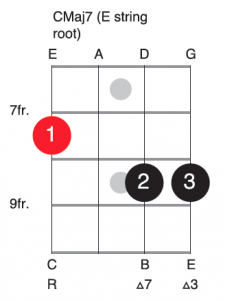 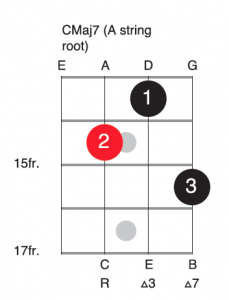 My next video is going to be on chord progressions. That's when the real magic happens. When you can combine all manner of voicings with chord movements, you have music. Be sure to sign up to the newsletter (below) to get that lesson and all subsequent ones straight to your inbox (as well as a very useful free ebook).

Practice playing all these C chord voicings together and then try finding your own combinations. Write any you like down. There are some free blank chord box PDFs here.