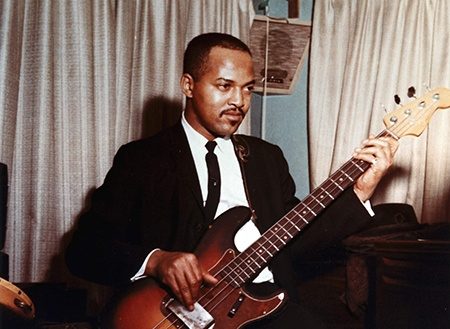 James Jamerson is without a doubt one of the most influential bass players of all time, perhaps the undisputed number one. He was the in house bass player for the Funk Brothers; the legendary session group out of Detroit, most famous for creating the Motown sound. He died in 1983 but his bass playing will live on for centuries.

A jazz player at heart, having switched from the double bass, Jamerson’s bass lines have a life and melody all of their own. He was required to come up with his lines quickly, often following a chord chart. His jazz experience enabled him to effortlessly play beautifully creative lines employing chromaticism, melody, rhythmic interest and a strong sense of groove and feel.

Famous for his hooked one finger plucking style which came from his double bass technique (see pic above and video below). He rested his right hand on the pickup cover and plucked away with that index finger.

1962 Fender Precision with heavy gauge flatwound LaBella strings and an Ampeg B15 and/or direct signal into a mixing desk at the studio. The bridge cover of these old Fenders had a mute on the underside, giving the bass a lovely thuddy, warm and fat tone. Any Precision style bass with some flatwounds and a foam mute will get you close to that tone. A tube DI like the A Designs Reddi, Jules Monique or Acme Motown DI will get you even closer.

What’s Going On. Check out his incredible one finger technique as well as his touch, feel, tone and creativity. It's bass playing of the highest order.

Pick the bass players you listen to carefully as their influence will inevitably creep into your personal voice. You have the definitive, archetypal blueprint in James Jamerson. Click To Tweet

Standing In The Shadows Of Motown - Book 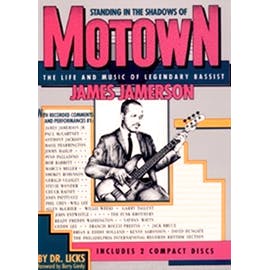 This is widely considered as one of the bibles of bass and is a wonderful resource for learning all about his upbringing, gear, technique, style and much more. It also contains transcriptions of his greatest lines with no TAB so fantastic for reading practice. Here are more great bass books to check out.

Standing In The Shadows Of Motown - Film 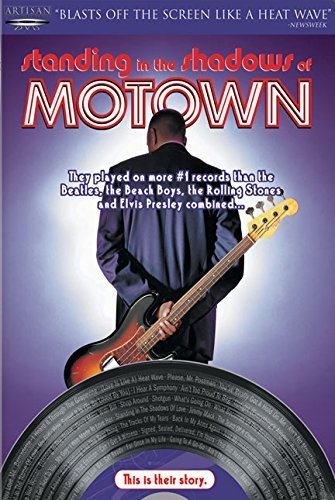 This documentary is a fascinating and sometimes heartbreaking documentary about the musicians involved in making the Motown sound immortal. It features concert footage from a gig put together for the film as well as interviews with the surviving members of the Funk Brothers and the artists covering the songs.

I could listen to James Jamerson all day and so could many modern bass players judging by the influence he has had on so many people's playing! I feel so grateful to him for what he achieved as I know it's inspired me and given me so much in my playing. Do you have any players you feel the same way about? Comment below...