How to Use Modes: A Guide For Bass Players

Welcome to this guide to the major scale modes and how you can use them in your bass playing.

First, I want you not to get too bogged down into how modes are formed and the theory behind them. You can check out these lessons if you want to dig a little deeper.

How To Memorise The Major Scale Modes

Learn A Killer Way To Understand Modes On Bass Guitar

Modes are just scales and you hear them in all kinds of different music. They create different colours and moods so are important for the following:

For the video lesson, I focused mainly on the seven modes from C Major. Here are the triads, chords, 7th arpeggios, Roman Numeral (these are what musicians use to label the number in the scale that chord is built from).

The Modes, Triads, Arpeggios, And Chords From C Major

There really is a lifetime of music waiting for you from the simple information presented in that image (download at the bottom of the page).

Here are seven examples I used in the video lesson.

The IV is F and the V is G so we're using notes from F Lydian over the IV chord (F) and G Mixolydian over the V chord (G). All these notes belong to the key of C Major so you could be thinking of those notes if you're not familiar with the modes yet.

Pink Floyd used chord progressions like this all the time.

The iii chord comes from the Phrygian mode which has a minor second right at the start of the scale. This imbues it with a dark quality heard a lot in metal and rock. The iii chord is Em and the IV is F so E Phrygian and F Lydian fit over these.

A good (non metal) example of this is Like I Love You by Justin Timberlake.

This is an incredibly common chord progression in jazz music. There are so many strategies you can use to play strong walking bass lines and you can't really boil it down to one paragraph or one thing that you can do .

However, a good start is knowing that the ii V, and I chords are constructed from the Dorian, Mixolydian, and Ionian modes respectively. So that's Dm7 G7 and CMaj7 in this key.

The sibling of the major ii V I is the minor ii V i (notice the upper and lower case roman numerals referring to the major/minor quality of the chord). This is where the Locrian mode gets a look in. It's used over the ii chord - Bm7b5 (or B 'half-diminished') in this key.

The V chord is odd here. To make it dominant (E7) and not Em7 as you would expect from this key, the fifth mode of the harmonic minor scale is borrowed. This mode is the Phrygian Dominant  (it's exactly the same as E Phrygian with the addition of the all important G# which creates the E7 chord which has a much stronger pull to the i chord).

This is just something that was figured out decades ago and now sounds 'correct' to our collective ears. Here's the chart:

This is another interesting situation. The example here is a Texas Shuffle type simple blues in Bb. Notice the appearance of only Dominant chords (7). These are derived from the Mixolydian mode and it is this collection of notes that is the hero in blues music. So many cool bass patterns can be created from these notes (and a few other tasty additions). 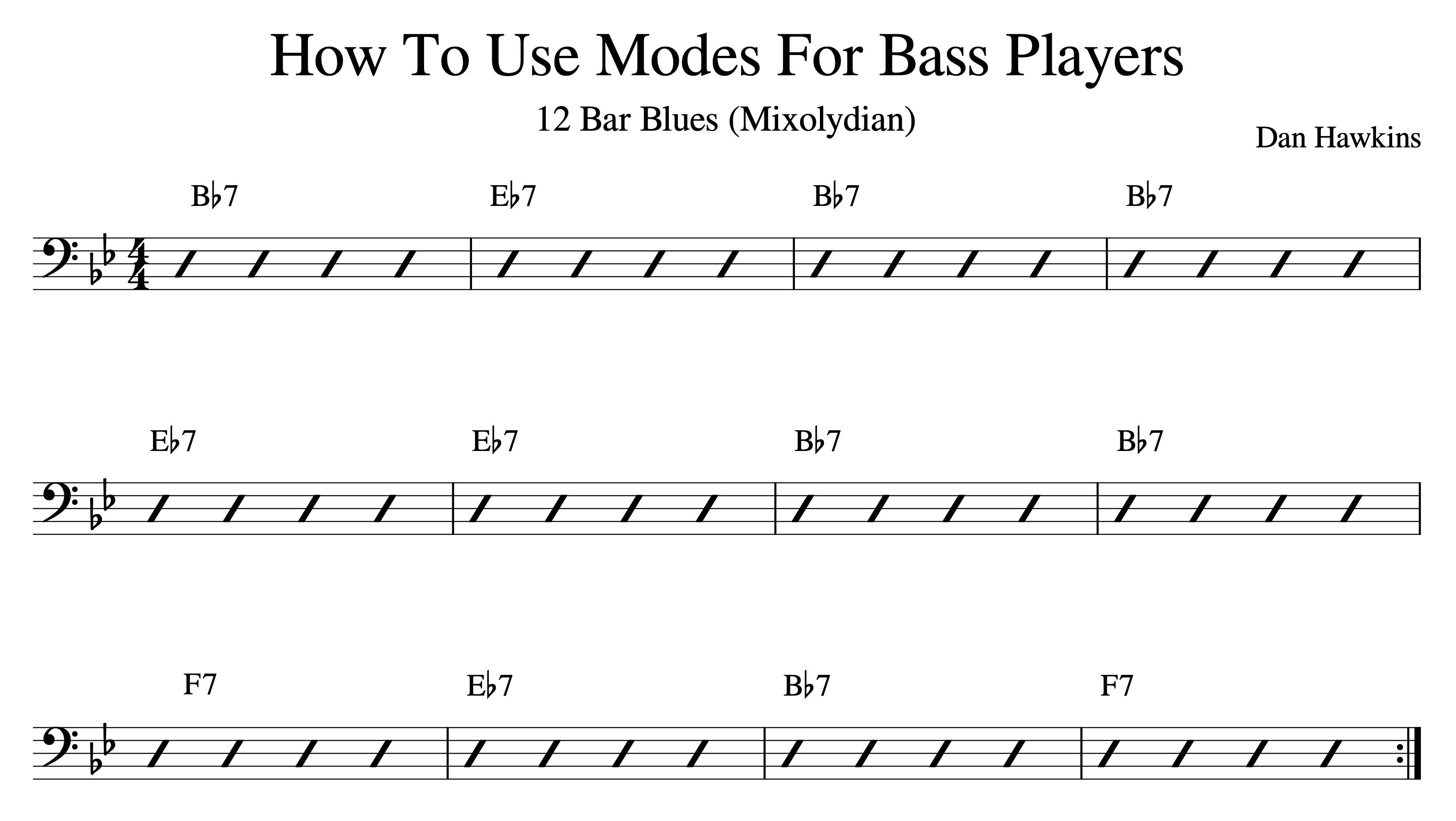 Modal Interchange is a fancy term to describe the use of isolated modes that don't have a relationship to one single key. You can get some incredibly beautiful results from writing music using this idea.

Here's a particular favourite of mine featuring the titanic Tony Levin on bass.

There are so many options with this kind of music but the rule for the example below is fairly simple. Use Lydian for the major seventh chords and Dorian for the minor sevenths. 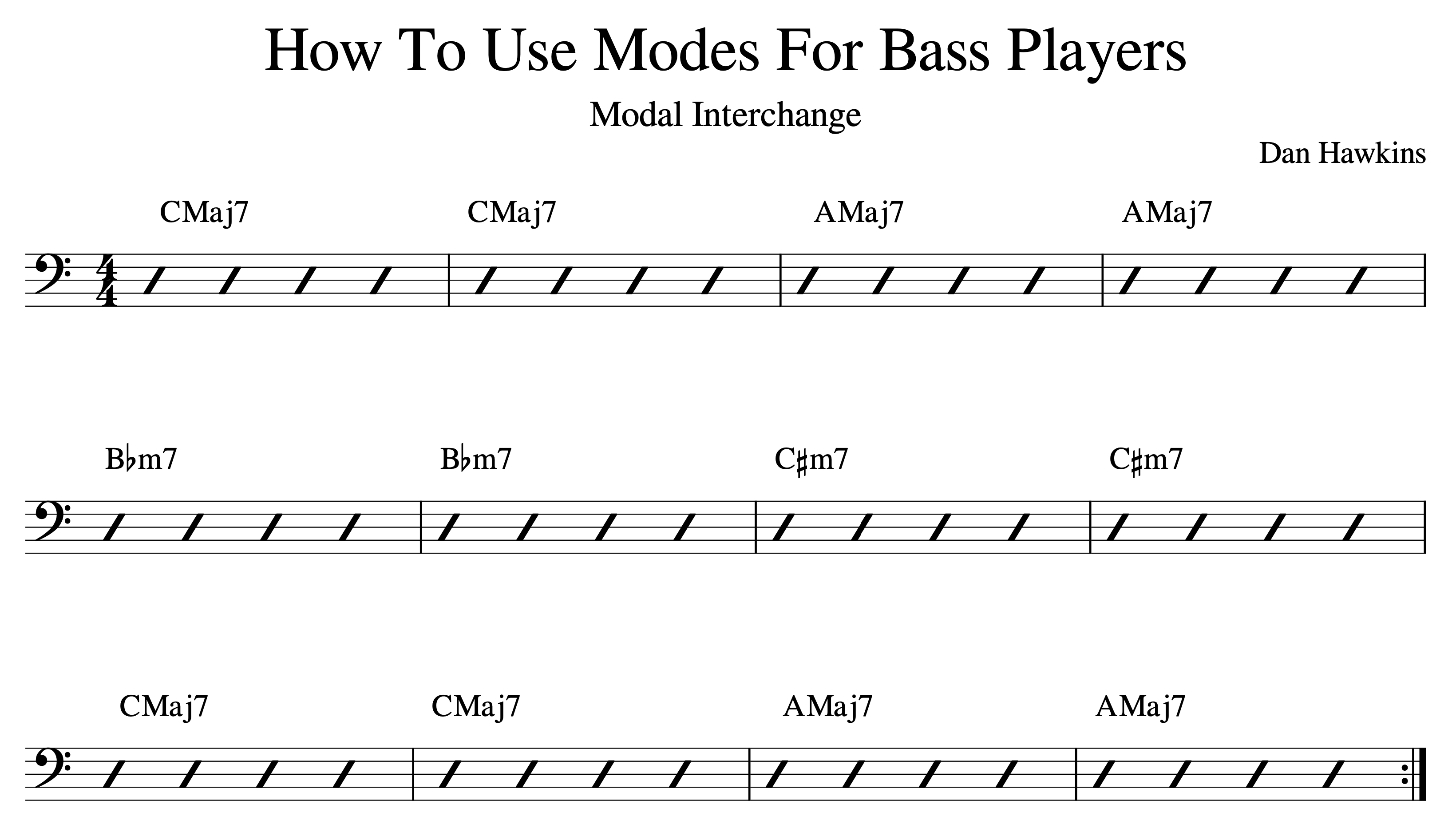 I'll send you a free Bass Guitar Resources ebook too.

How To Use Modes - A Guide For Bass Players