How To Learn And Use Triads On Bass Guitar

Join 1000s getting free bass tips and lessons every Sunday

My weekly newsletter is packed full of bass tips, news, and lessons, plus you'll get an exclusive free copy of The Bass Guitar Resource Book!

If you are comfortable with the relationship between scales, arpeggios, triads and chords, you can create bass lines with ease as well as strengthen your musical ear. This video takes you through the formation of major, minor, diminished and augmented triads.

Briefly, triads are formed from the first, third and fifth notes of a scale. They are built by stacking thirds. A 'third' is an interval - the distance between two musical pitches. There are two types of third: a minor third and a major third and there are only four possible combinations:

It is a very good idea to learn two patterns (at least) on the bass so you have freedom to move in any direction on the fretboard.

Memorise those shapes inside out and then practise them over the following chord changes. Watch the video for a demo of this. 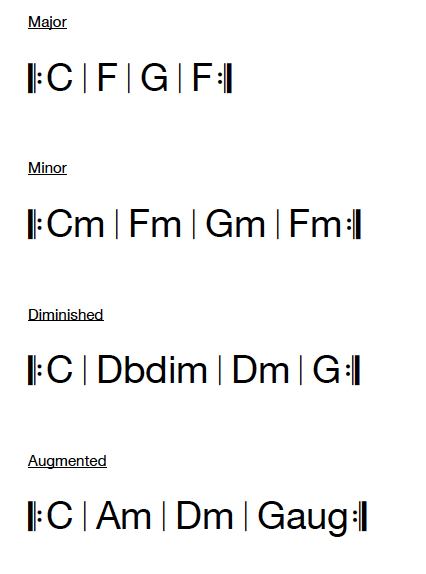 How To Learn And Use Triads On Bass Guitar

The idea behind every lesson on this site is to provide a musical context to a subject and it is important to make music immediately when learning music theory. Always aim to associate anything you learn on the bass to an actual musical idea -. that's what we picked up the bass to do: make music!

If you haven't watched the scale video, I recommend doing that. Here's an infographic that outlines the relationship between scales, triads, arpeggios and chords.

Subscribe to the newsletter for your exclusive FREE ebook

Learn the core principles of good bass playing that will have you grooving in no time!

I send out a newsletter every Sunday packed full of bass tips, news, and lessons, plus if you sign up you get my free Bass Guitar Resource Book. You can't find this anywhere else so don't miss this special offer!

send me my free book

100% Privacy Guarantee. Your email address is safe with me. This will also sign you up to my weekly newsletter where you will get free bass tips, lessons and advice. All of it you can use in your playing. Unsubscribe easily at any time.